It’s 2019 and Easterseals is celebrating 100 years of service and advocacy for people living with disabilities!

It is an incredible milestone and I have been lucky to learn more about our history and meet some of our supporters and clients over the past few months. Through this celebration I have had the pleasure of getting to know Susan K., an Easterseals Legacy Society Member and former client who received Physical Therapy services in the 1960’s. In speaking with Susan to learn about her life and her experiences it struck me how far we have come as a society and, yet, how far we still have to go. This is why the next 100 years of Easterseals are so important.

Susan was diagnosed with Cerebral Palsy early in life. Her physical challenges have never defined her; fortunately, with the advocacy of loved ones early in life she never believed she couldn’t achieve whatever she set her mind to. In Susan’s words:

“My story as an “Easterseals child” began sixty some years ago in, what was then, the small, sleepy – some might say idyllic – town of Doylestown, Pennsylvania, where I was born and raised.

Doylestown, in the 1950’s and 60’s, was a town small enough that most families knew each other somehow or other…from school, church, civic activities or shopping at the A&P grocery store in the middle of town. I attended the public “borough schools” from kindergarten through graduation from high school. However, there was a time that my going to public school was in doubt. There were a few who felt a physically handicapped child should not be integrated in school with other more “normal” children. But, thanks to the perseverance of my parents and a few enlightened individuals, it was felt there was no reason I could not be mainstreamed into the school system. And, only minor physical accommodations were ever made. Accommodations that would be almost laughable today, they were so simple. My first four years of school were spent in a very old, gothic structure with four floors and restrooms in the basement. As an example, in first and second grades, when we had one of our numerous fire drills, a male teacher, on his way down the stairs from the upper floors to the outside, would sweep me up in his arms and carry me down the long outside flight of stairs to the playground where everyone gathered. However, on a daily basis, I navigated all those steps totally on my own.

Friendships made, early on, were friendships that live on even today. I was different but accepted. Sure, occasionally different is picked on, picked last; but because I met my school mates at a time when children have few preconceived notions, for the most part, I had a fairly normal school experience. I’ve always felt my public-school experience, and the general acceptance I always felt – from classmates to teachers – is what helped to form my feelings of self-worth.

Of course, during those early growing up years, I was a regular client of Easterseals “treatment centers”. I had physical therapy, fortunately not needing occupational or speech therapies. Occasionally, at the treatment center, I would meet with the great Dr. Burton Chance, an early pioneer in the field of treating handicapped children. My years of physical therapy, years of wearing leg braces, were free, courtesy of the “Easterseal Society”. Generous donations then, as now, really do change the course of life for Easterseals children whose families might not, otherwise, be able to afford the cost.

After high school graduation, I went on to college. Then, two months after college graduation, I began my first full time job that would end up being a 36-year career in state government. Seven years ago, I retired from that career.”

Since 1960 the world has evolved and great strides have been made to provide individuals with disabilities greater equality and access, particularly in our schools. Easterseals was at the forefront of advocacy to pass the American Disabilities Act and has always sought to provide innovative services to help people with disabilities find greater independence. Today, there would be no doubt that Susan would attend public school with her peers. Today, Easterseals breaks down barriers to inclusion and stereotypes before they are ever built; our Friendship Academy preschool program integrates children with and without disabilities to learn and grow together. This innovative approach to preschool began in 2006 and, locally, has had significant impact for participants.

But we are far from done.

When I asked Susan if she has seen a significant difference in society’s perception of individuals with disabilities she responded,

“The treatment of those who are “different” – physically, mentally, racially, ethnically, gender based, etc. – hasn’t really changed all that much. There have always been – are now – some who are compassionate and enlightened. People who don’t flinch at having normal interaction with those who are perceived as being different. Who help others when they see a need.

But, we also live in a world where threats of all kinds could be just around the corner. A world where many seem to be looking out just for themselves. To them, dealing with someone who is slower, or in need of assistance, is an inconvenience they’d rather avoid on their way to protecting themselves. I’ve often wondered how people like that would handle themselves, or a loved one, becoming suddenly disabled. Would they be angry when they see a handicapped parking space being taken by someone who, literally, sprints from car to building? Would they expect assistance as their “right”?

I’ve been one of the lucky Easterseals children in that my disability, for most of my life, did not hamper or define what I wanted to do. Much of the credit goes to family, friends and teachers I had at each step along the way. But, of course, had it not been for Easterseals and the services they provide, the story might have been totally different.”

It is critical that Easterseals continue to advocate, continue to innovate, and continue to ensure that individuals like Susan have the resources and services they need to live, learn, work and play in their communities. Join Easterseals for our next 100 years where, together, we will work to build a future where everyone is 100% included and 100% empowered. 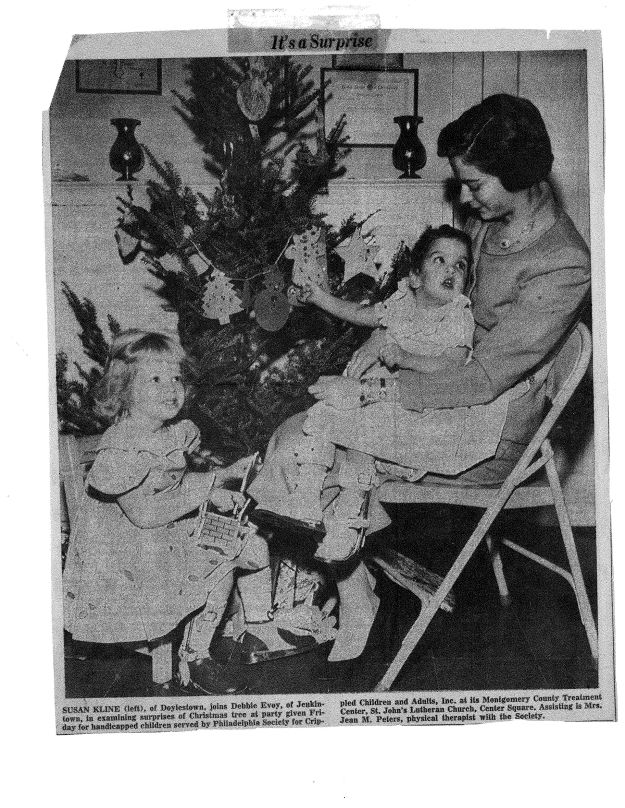 Newspaper clipping of Susan as a child.